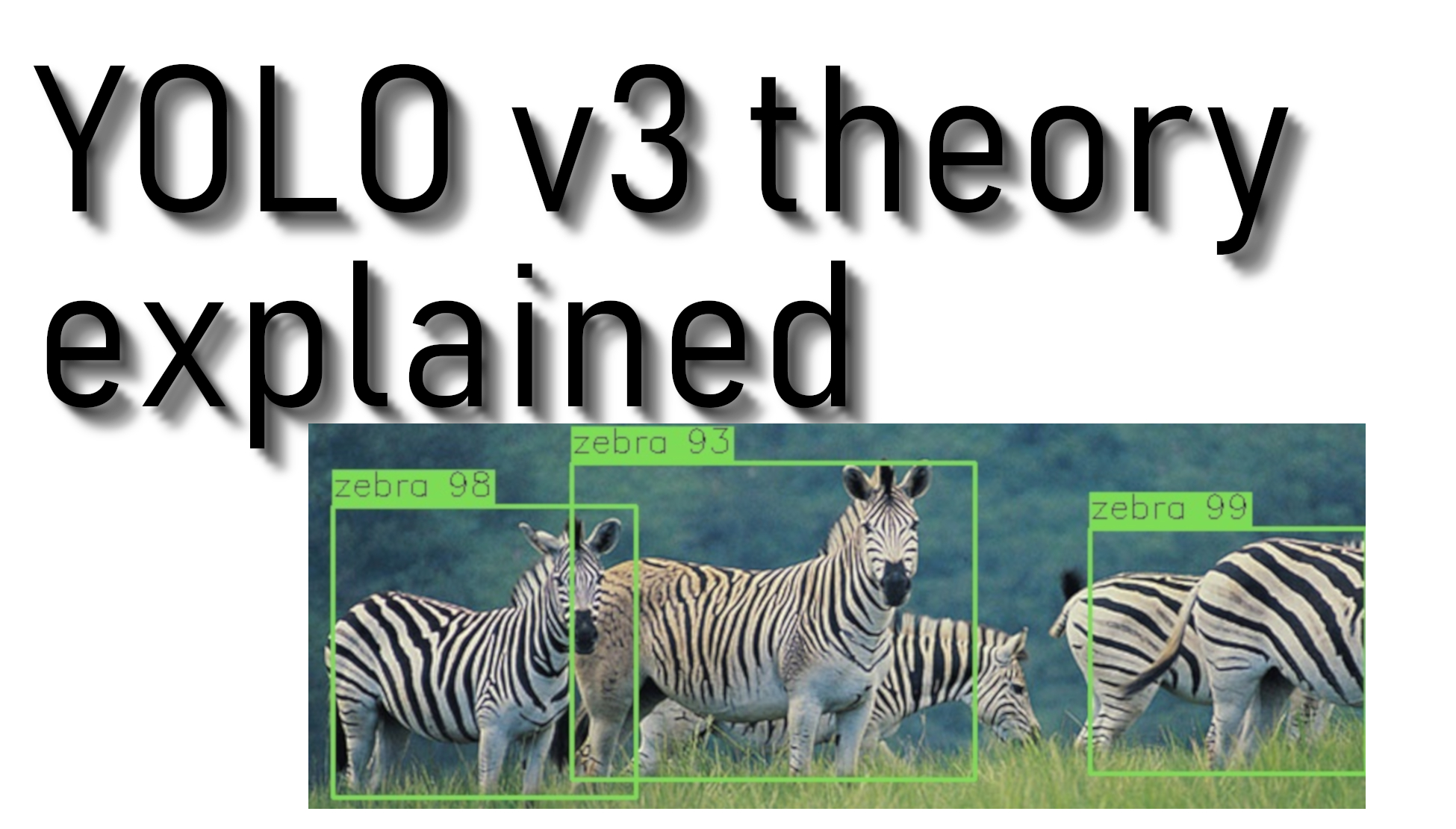 In this tutorial, I will explain to you what is YOLO v3 object detection model, and how it works behind the math

In this tutorial, I will explain what the YOLO model is and how it works in detail.

In comparison to recognition algorithms, a detection algorithm predicts class labels and detects objects locations. So, It not only classifies the image into a category, but it can also detect multiple Objects within an Image. This algorithm applies a single Neural network to the Full Image. It means that this Network divides the image into regions and predicts bounding boxes and probabilities for each area. The predicted probabilities weigh these bounding boxes.

The last time when I was working with object detection, I made a CS:GO aimbot tutorial, but it was pretty slow (~10 FPS). So now it's time to make it work faster. One of the biggest takeaways from this experience is realizing that the best way to learn an object detection algorithm is to implement it from scratch by yourself. That's a short introduction to what we'll do in this tutorial. But before we get out hands dirty with code, we must understand how YOLO works.

To fully understand this tutorial: 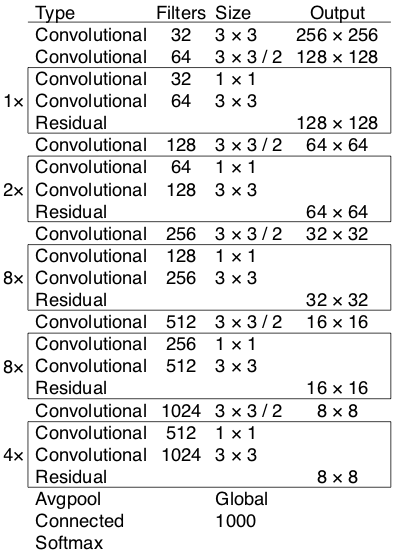 YOLO is invariant to the size of the input image. However, in practice, we might want to stick to a regular input size due to various problems that only show their heads when implementing the algorithm.

A big one among these problems is that if we want to process our images in batches (images in clusters can be processed in parallel by the GPU, leading to speed boosts), we need to have all fixed height and width images. This is required to concatenate multiple images into a large batch.

In the same way, as in all object detectors, the features learned by the convolutional layers are passed onto a classifier/regressor, which makes the detection prediction (coordinates of the bounding boxes, the class label, etc.).

For example, we have (B x (5 + C)) entries in the feature map. B represents the number of bounding boxes each cell can predict. According to the paper, each of these B bounding boxes may specialize in detecting a certain kind of object. Each bounding box has 5 + C attributes, which describe the center coordinates, dimensions, objectness score, and C class confidences for each bounding box. YOLO v3 predicts three bounding boxes for every cell.

We expect each cell of the feature map to predict an object through one of its bounding boxes if the object's center falls in the receptive field of that cell.

This has to do with how YOLO is trained, where only one bounding box is responsible for detecting any given object. First, we must ascertain which of the cells this bounding box belongs to. 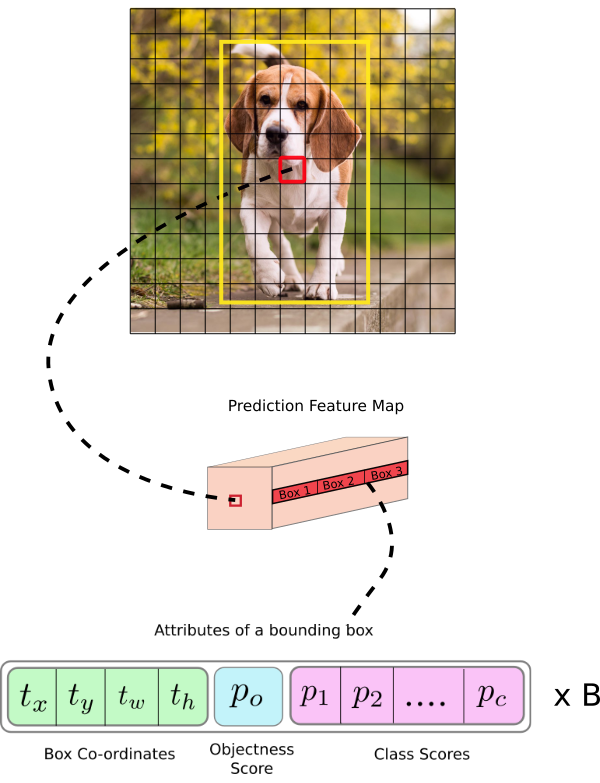 Now, this cell can predict three bounding boxes. Which one will be assigned to the dog's ground truth label? To understand that, we must wrap our heads around the concept of anchors. (Note that the cell we're talking about here is a cell on the prediction feature map. We divide the input image into a grid to determine which cell of the prediction feature map is responsible for prediction)

For better understanding, we can analyze another example with more images:

Let's look in greater detail at what this encoding represents: 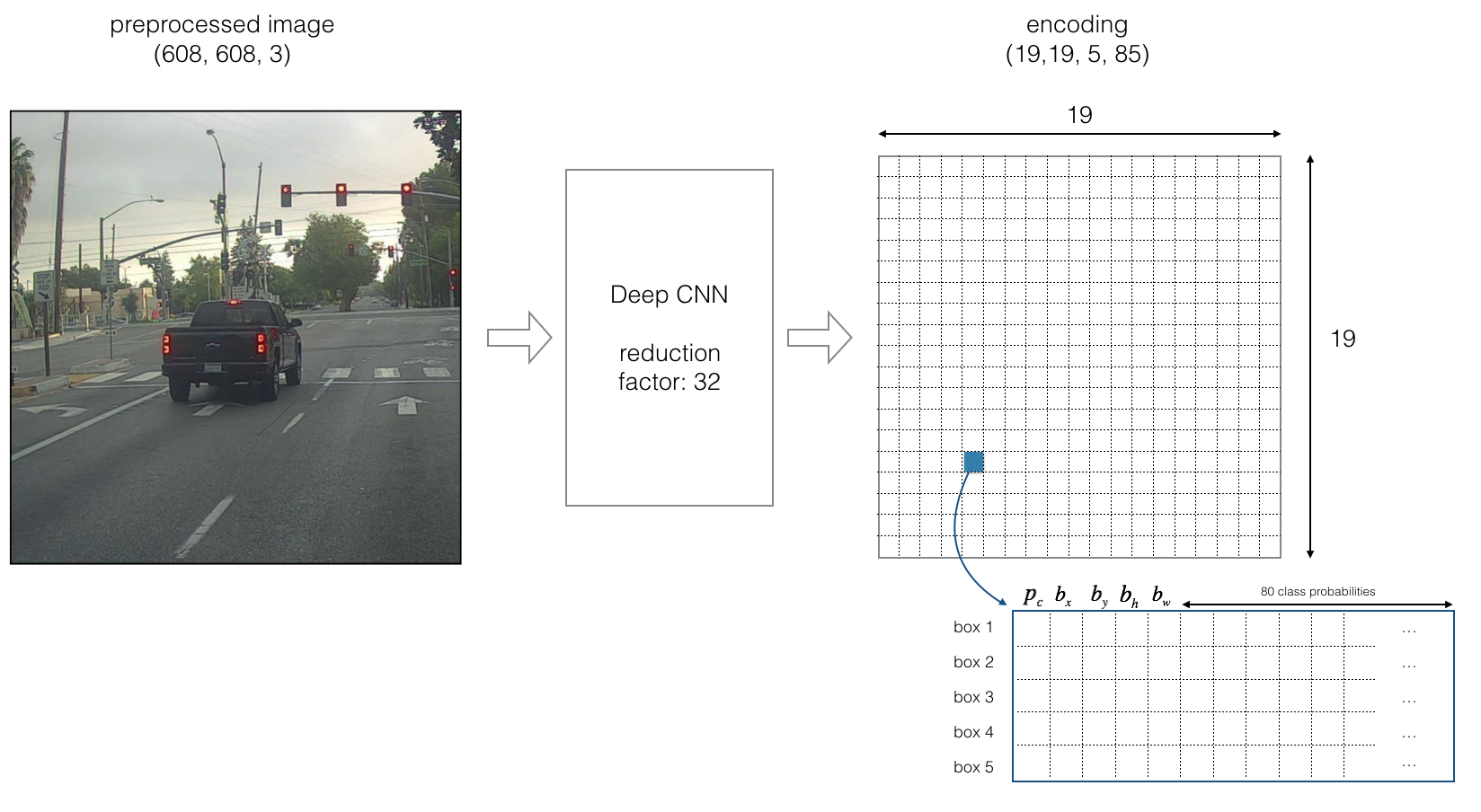 If the center/midpoint of an object falls into a grid cell, that grid cell is responsible for detecting that object.

Since we are using five anchor boxes, each of the 19x19 cells thus encodes information about five boxes. Anchor boxes are defined only by their width and height. 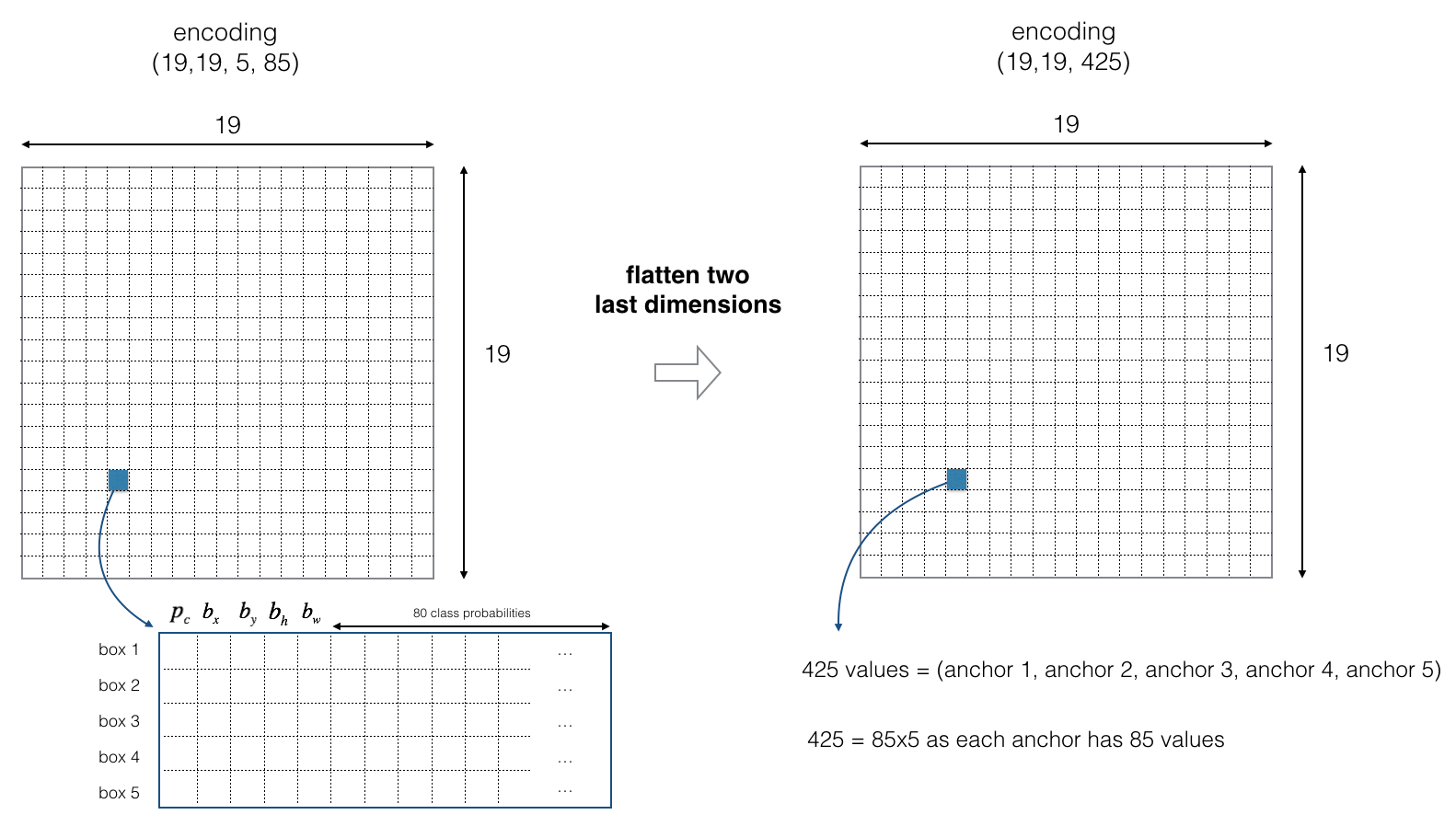 We will compute the following elementwise product for each box (of each cell) and extract a probability that the box contains a specific class.

Here's one way to visualize what YOLO is predicting on an image:

Doing this results in this picture: 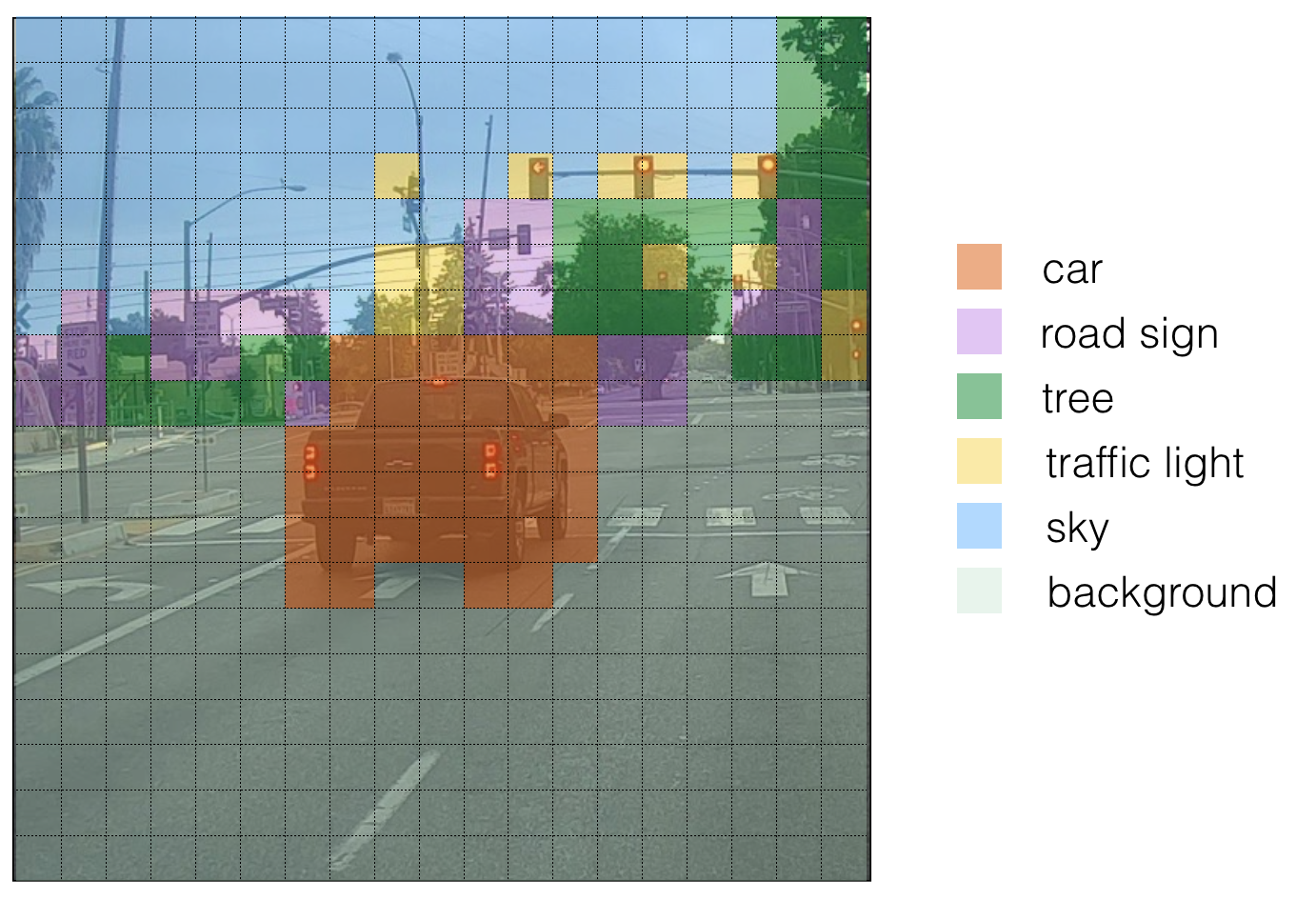 The above visualization isn't a core part of the YOLO algorithm for making predictions; it's just an excellent way of visualizing an intermediate result of the algorithm.

Another way to visualize YOLO's output is to plot the bounding boxes that it outputs. Doing that results in a visualization like this: 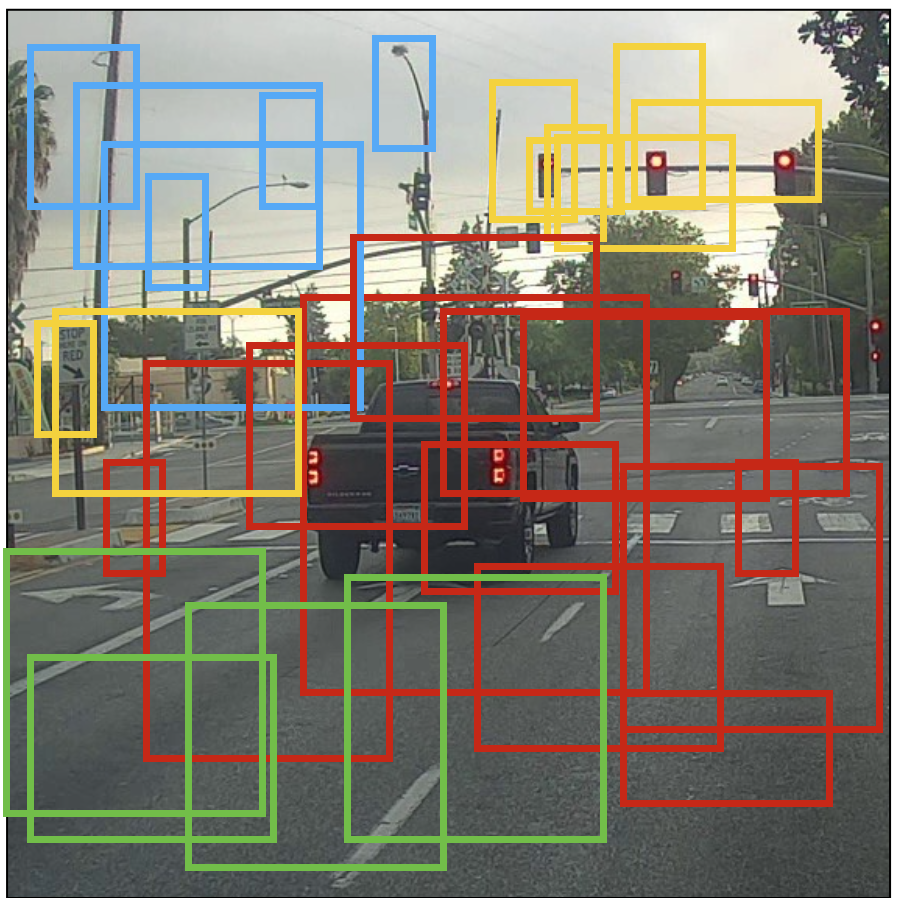 In the figure above, we plotted only boxes that the model had assigned a high probability to, but this is still too many boxes. We want to filter the algorithm's output down to a much smaller number of detected objects. To do so, we'll use non-max suppression, more about that, and we'll talk in 9th this tutorial part.

Predicting the bounding box's width and height might make sense, but that leads to unstable gradients during training. Instead, most modern object detectors predict log-space transforms or offsets to pre-defined default bounding boxes called anchors.

Then, these transforms are applied to the anchor boxes to obtain the prediction. YOLO v3 has three anchors, which result in the prediction of three bounding boxes per cell.

Anchors are bounding box priors that were calculated on the COCO dataset using k-means clustering. We are going to predict the width and height of the box as offsets from cluster centroids. The box's center coordinates relative to the location of the filter application are predicted using a sigmoid function.

Here bx, by, bw, bh are the x, y center coordinates, width, and height of our prediction. tx, ty, tw, th (xywh) is what the network outputs. cx and cy are the top-left coordinates of the grid. pw and ph are anchors dimensions for the box.

We are running our center coordinates prediction through a sigmoid function. This forces the value of the output to be between 0 and 1. Usually, YOLO doesn't predict the absolute coordinates of the bounding box's center. It predicts offsets which are:

But wait, what happens if the predicted x and y coordinates are greater than one, for example (1.2, 0.7). This means that center lies at (7.2, 6.7). The center now lies in a cell just right to our red cell, or the 8th cell in the 7th row. This breaks the theory behind YOLO because if we postulate that the red box is responsible for predicting the dog, the center of the dog must lie in the red cell and not in the one beside it. So, to solve this problem, the output is passed through a sigmoid function, which squashes the output in a range from 0 to 1, effectively keeping the center in the grid which is predicting.

6. Dimensions of the Bounding Box

The dimensions of the bounding box are predicted by applying a log-space transformation to the output and then multiplying with an anchor.

Fir of all, the object score represents the probability that an object contains inside a bounding box. It should be nearly 1 for the red and the neighboring grids, whereas almost 0 for the grid at the corners.

The objectness score is also passed through a sigmoid, which should we can interpret as a probability.

Talking about Class confidences, they represent the probabilities of the detected object belonging to a particular class (Dog, Cat, person, car, bicycle, etc.). In older YOLO versions, the softmax activation function was used to calculate the class scores.

In YOLO, authors have decided to use sigmoid instead. The reason is that Softmaxing class scores assume that the classes are mutually exclusive. In simple words, if an object belongs to one class, then it cannot belong to another class. This is true for the COCO database, which we will implement first.

Each cell predicts three bounding boxes using three given anchors at each scale, making the total number of anchors used 9. (The anchors are different for different scales).

YOLO authors report that this helps better detect tiny objects; this was a frequent complaint with the earlier YOLO versions. Upsampling helps the Network to learn fine-grained features that are instrumental for detecting small objects.

9. Output Processing (Filtering with a threshold on class scores)

First, we filter boxes based on their objectness score. Generally, boxes having scores below a threshold (for example, below 0.5) are ignored. Next, Non-maximum Suppression (NMS) intends to cure the problem of multiple detections of the same image. For example, all the three bounding boxes of the red grid cell may detect a box, or the adjacent cells may detect the same object, so NMS is used to remove multiple detections.

Specifically, we'll carry out these steps:

For better understanding, I will use the same example with a car I mentioned above. At first, we are going to apply the first filter by thresholding. We want to get rid of any box for which the class "score" is less than a chosen threshold. The model gives us a total of 19x19x5x85 numbers, with each box described by 85 numbers. It'll be convenient to rearrange the (19,19,5,85) (or (19,19,425)) dimensional tensor into the following variables:

Even after filtering by thresholding over the classes scores, we still end up with many overlapping boxes. A second filter for selecting the right boxes is called NMS. NMS uses the critical function called "Intersection over Union", or IoU.

Now, to implement non-max suppression, the key steps are:

These steps will remove all boxes that have a large overlap with the selected boxes. Only the "best" boxes remain:

YOLO can only detect objects belonging to the classes present in the dataset used to train the Network. I will be using the official weight file for our detector. These weights have been obtained by training the Network on the COCO dataset, and therefore we can detect 80 object categories.

Here one more time, I will come back to my example with a car to summarise how our model should work:

That's it for the theory part. I explained enough about the YOLO algorithm to understand how it works. In the next part, I will implement various layers required to run YOLOv3 with TensorFlow.