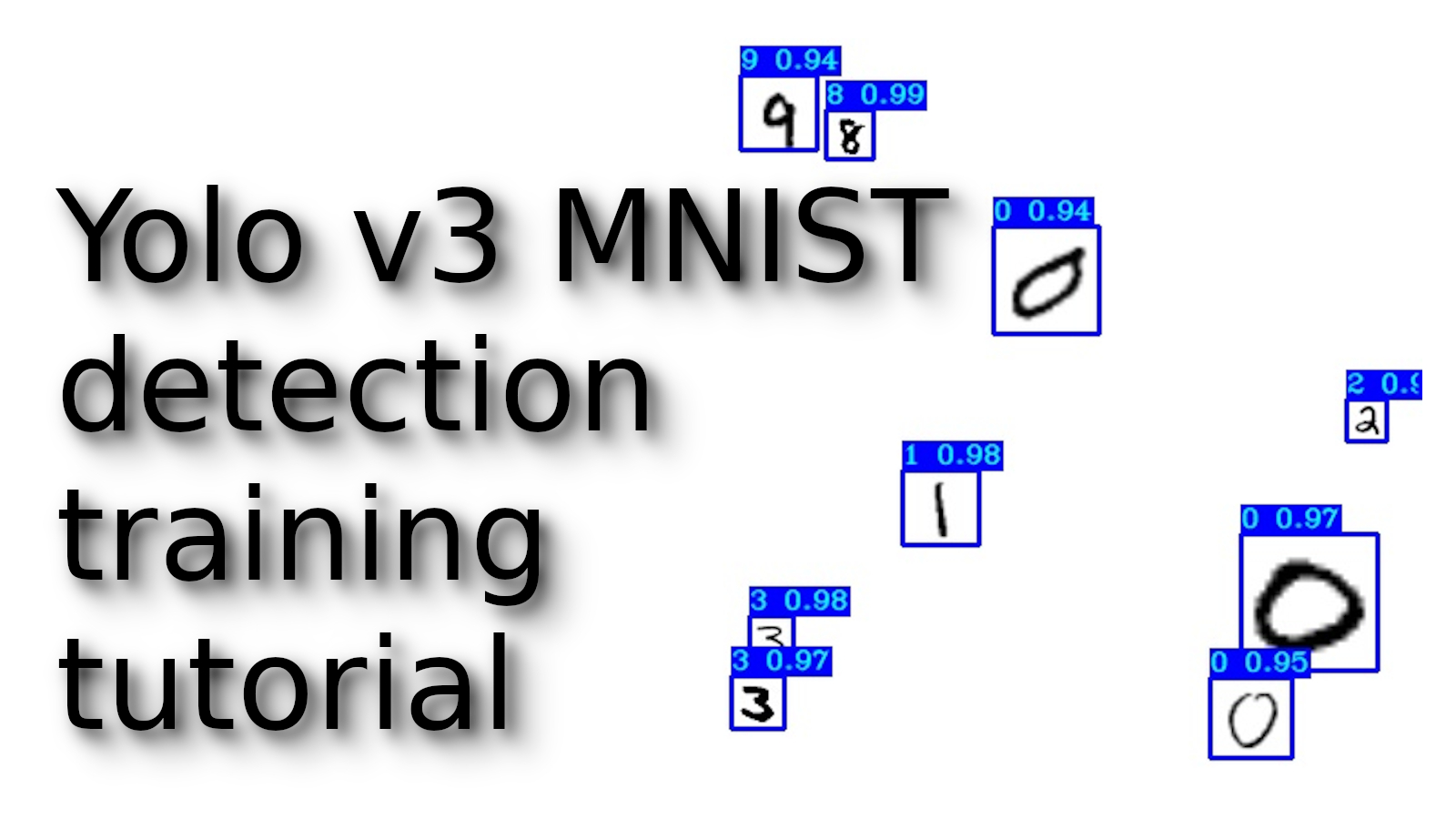 In a previous tutorial, I introduced you to the Yolo v3 algorithm background, network structure, feature extraction, and finally, we made a simple detection with original weights. In this part, I’ll cover the Yolo v3 loss function and model training. We’ll train a custom object detector on the Mnist dataset.

In YOLO v3, the author regards the target detection task as the regression problem of target area prediction and category prediction, so its loss function is somewhat different. For the loss function, Redmon J did not explain in detail in the Yolo v3 paper. But I found Yolo loss explanation in this link; the loss function looks following: 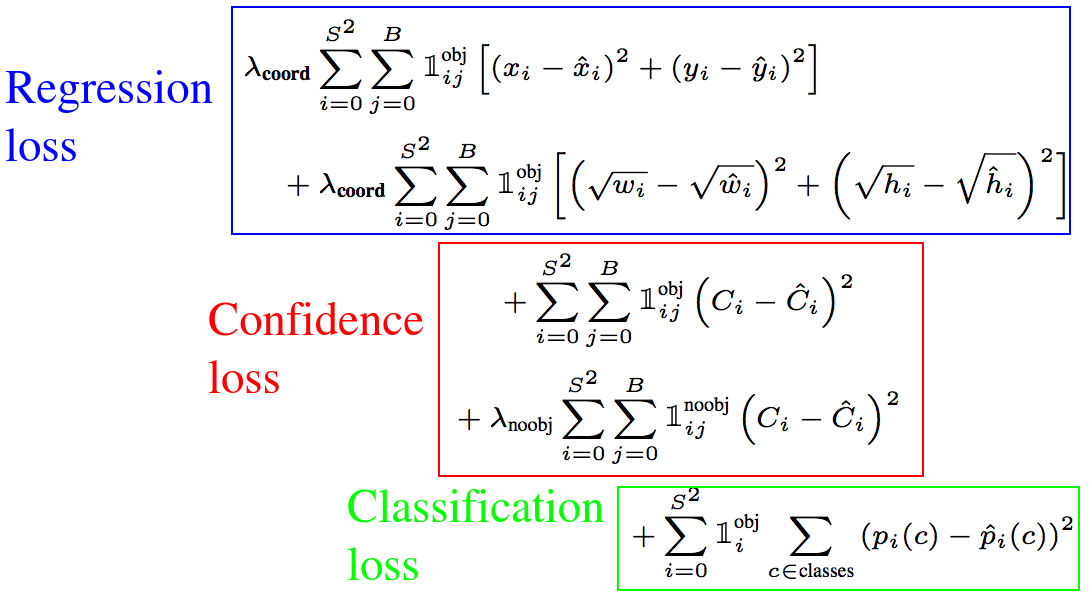 However, through the interpretation of the darknet source code, the loss function of YOLO v3 can be summarized as follows:

YOLO v3 directly optimizes the confidence loss to let the model learn to distinguish the background and foreground areas of the picture, which is similar to the RPN function in Faster R-CNN:

The rule of determination is simple: if the IoU of a prediction box and all actual boxes is less than a certain threshold, it is determined to be the background. Otherwise, it is the foreground (including objects).

This looks as follows:

In my implementation, the original IoU loss was replaced with GIoU loss. This improved the detection accuracy by about 1%. The advantage of GIoU is that it enhances the distance measurement method between the prediction box and the anchor box.

This is quite a new proposed way to optimize the bounding box-GIoU (Generalized IoU). The bounding box is generally represented by the coordinates of the upper left corner and the lower right corner, namely (x1, y1, x2, y2). Well, you find that this is a vector. The L1 norm or L2 norm can generally measure the distance of the vector. However, the detection effect is very different when the L1 and L2 norms take the same value. The direct performance is that the IoU value of the prediction and the actual detection frame changes significantly, which shows that the L1 and L2 norms are not very good to Reflect the detection effect.

When the L1 or L2 norms are the same, it is found that the values of IoU and GIoU are very different, which indicates that it is not appropriate to use the L norm to measure the distance of the bounding box. In this case, the academic community generally uses the IoU to calculate the similarity between two bounding boxes. The author found that using IoU has two disadvantages, making it less suitable for loss function:

The three images above have IoU = 0.33, but the GIoU values are 0.33, 0.24, and -0.1, respectively. This indicates that the better the two bounding boxes overlap and align, the higher the GIOU value will be.

And here how it looks in code (part from original code):

One problem training neural networks faces, especially Deep Neural Networks, is that the gradient disappears or the gradient explodes. This means that when we train a Deep Network, the derivative or slope sometimes becomes very large, very small, or even decreases exponentially. At this time, the Loss we see will become NaN. Suppose we are training such an extremely Deep Neural Network. The activation function g(z)=z is used for simplicity, and the bias parameter is ignored.

The intuitive understanding here is: if the weight W is only slightly larger than one or the unit matrix, the output of the deep neural network will explode. And if W is somewhat smaller than 1, it may be 0.9; the output value of each layer of the network will decrease exponentially. This means that the proper weight value initialization is particularly important! The following is a simple code to show this:

After running this above code, you should see the following chart: 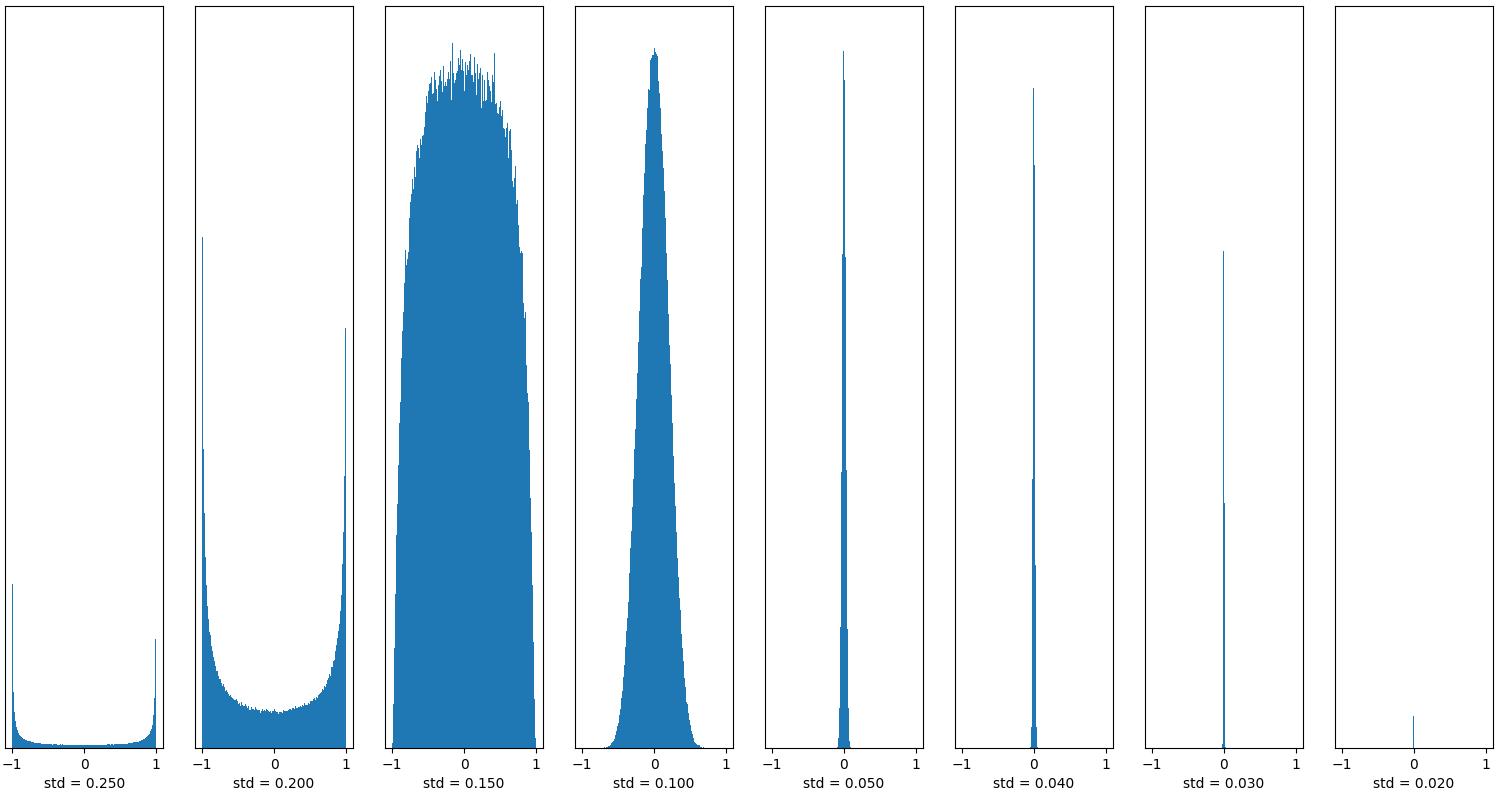 But suppose we minimize the Loss of Network training. In that case, it is not appropriate to always use a higher learning rate because it will make the weight gradient oscillate back and forth, and it is difficult to make the Loss of training reach the global minimum. Therefore, the cosine attenuation method in the same paper is adopted in the end. This stage can be called a consensus decay stage. This is how our learning rate chart will look like:

The current mainstream approach to target detection is to extract features based on the pre-trained model of the Imagenet dataset and then perform fine-tuning training on target detection (such as the YOLO algorithm) on the COCO dataset referred to as transfer learning. Transfer learning is based on a similar distribution of the data set. For example, the Mnist is entirely different from the COCO dataset distribution. There is no need to load the COCO pre-training model.

To test if custom Yolo v3 object detection training works for you, you must first complete the tutorial steps to ensure that simple detection with original weights works for you.

When you have cloned the GitHub repository, you should see the “mnist” folder containing mnist images. From these images, we create mnist training data with the following command:

This make_data.py script creates training and testing images in the correct format. Also, this makes an annotation file. One line for one image, in the form like the following:

The origin of coordinates is at the left top corner, left top => (xmin, ymin), right bottom => (xmax, ymax), label_index is in range [0, class_num — 1]. We’ll talk more about this in the next tutorial, where I will show you how to train the YOLO model with your custom data.

Now, you can train it and then evaluate your model running these commands from a terminal: python train.py tensorboard --logdir ./log

Track your training progress in Tensorboard by going to http://localhost:6006/; after a while, you should see similar results to this:

Then you should see similar results to the following: 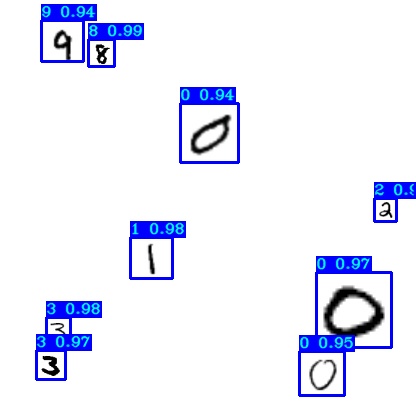 That’s it for this tutorial. We learned how the Loss works in the Yolo v3 algorithm, and we trained our first custom object detector with the Mnist dataset. This was relatively easy because I prepared all files to test training with only a few commands.

In the next part, I will show you how to configure everything for custom objects training, transfer weights from the original weights file, and finally fine-tuning with your classes. See you in the next part!